Author:
Mikael Schneider
27. June - 2019
seaweed
algae
kelp
taste
mouthfeel
Printer-friendly page
Article Seaweed exists in oceans all over the world, and there are many possibilities of using it in both the kitchen and in the food industry. However, since we don’t know enough about how to make seaweed taste good, we rarely eat it. Here, three scientists present how seaweed can be used.

Seaweeds exist in many variants and grow in all climatic zones on earth. Most species of seaweed are edible, and humans have by all appearances eaten seaweed for thousands of years. It is even likely that ancient humans developed bigger brains with the nutrient-rich seaweed as a contributing factor.

About the research article

”The rise of seaweed gastronomy: phycogastronomy” has been published in Botanica Marina, December 7th, 2018. It is written by Ole G. Mouritsen, professor of gastrophysics and culinary food innovation at University of Copenhagen and Head of center at Taste for Life; Prannie Rhatigan, MD and expert on seaweed from the Irish Seaweed Kitchen; and José Lucas Pérez-Lloréns, professor of ecology at Universidad de Cádiz in Spain. Read the abstract of the research article here: https://doi.org/10.1515/bot-2018-0041.

Still, not many people put seaweed on their list when shopping for dinner. We don’t know how to prepare seaweed to best utilise its taste potential.

Now, three international scientists and seaweed experts try to help consumers through their research paper on seaweed gastronomy. They point to three special characteristics of seaweed as an everyday ingredient: Umami, mouthfeel and appearance.

One of the experts is Head of Taste for Life, professor Ole G. Mouritsen, who through a period of years has researched seaweed’s potential as ingredient, especially in relation to the basic taste umami:

“Some seaweed species contain large amounts of free glutamate and seaweed is thus one of the few ingredients which tastes umami in itself. The Japanese Saccharina japonica is beyond doubt the best to give umami but Dulse, which is also found and sold in Denmark, is good as well. You can use it instead of meat or seasoning in soups and stocks. In the Japanese kitchen the soup dashi consists of an extract of seaweed and a special fish product,” Ole G. Mouritsen explains.

Because seaweed contains free glutamate it can add umami to food in either fresh, softened or blanched form. Furthermore, if you chop or blend the seaweed you can also use it in e.g. dip, pesto and chutney and thereby add umami.

Dried seaweed crushed to flakes or powder also works as a taste intensifier instead of salt or bouillon:

“The umami taste enhances the experienced taste of salt. Therefore, you can use seaweed as a taste intensifier and actually cut down on the salt. At the same time, seaweed has many different aromas, which can be used as with seasoning,” Ole G. Mouritsen says.

As a side benefit, seaweed contains several important nutrients, e.g. the polyunsaturated fatty acids omega-3 and omage-6 in addition to vitamin B12.

Most seaweed species are tough when just picked. However, the seaweed tenderizes when dried, fried, blanched or boiled, the scientists explain. Thus, it might be an advantage in relation to mouthfeel to prepare or grind the seaweed. Often, seaweed is sold as dried and in that case the seaweeds’ enzymes have decomposed and thereby tenderized it.

The texture characteristics of seaweed can be utilised especially in drying, frying or deep frying. Both green, red and brown species can be very crispy and be used as snacks or in desserts, if they are also candied in sugar.

However, when boiling seaweed, the mouthfeel can be unfortunate. This is especially the case with the big brown algae, e.g. sugar kelp. When being boiled, the brown seaweeds release huge amounts of slimy polysaccharides, i.a. agar and alginate. You want to avoid this in salads and soups, so they don’t become too slimy or viscous.

The slimy substances are, however, widely used in the food industry. Around 27 million tons of seaweed is produced per year, most of it from sea farming. Half of the produced seaweed is used as ingredients in food while the rest is used to extract thickeners, stabilisers and gelling agents for use in food production and other industries.

“Alginate and agar, plus carrageenan from red algae, are all substances which are extracted from seaweed and used in e.g. dairy products, desserts, fruit beverages, dressings and ice cream. The substances are also used in restaurants around the world, where chefs make gels and small liquid filled spheres, which resembles fish eggs,” Ole G. Mouritsen explains.

Colours and shapes embellish the food

Some seaweeds, especially red algae, have beautiful colours and shapes. As an accompaniment they can make dishes look beautiful and more colourful, the scientists propose. By doing this, the food’s aesthetic, and not the taste, is brought to the fore.

Even though they’re named red algae, they can have many different colours. In addition to this, they grow in different ramified or frayed shapes, which in itself can appear as very beautiful and edible decorations on the plate.

“It is an advantage to use ramified species of seaweeds, which are stiff enough to avoid collapsing and avoid the seaweed getting flat when it is served. You can use variants of differently shaped and coloured red algaes, for instance,” Ole G. Mouritsen says. 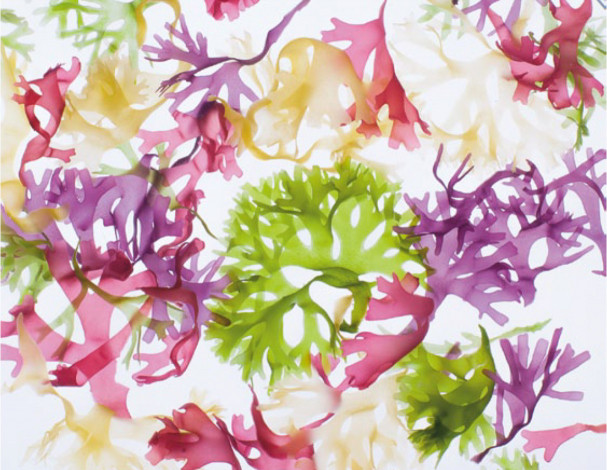 From professional chefs’ to consumers’ kitchens

According to the three experts, Spanish consumers have embraced seaweed because professional chefs have demonstrated how seaweed can be used and prepared in many tasty ways.

In Denmark we’re also in the process of using seaweed more:

“Something similar can be seen in the movement New Nordic Food, and a couple of Danish seaweed producers are now established. Seaweed is also popular in relation to the local ingredients-trend because it’s almost always possible to harvest seaweed locally. Also, there’s a belief in seaweed as a healthy supplement to the food,” Ole G. Mouritsen adds.

But if ordinary consumers are meant to use seaweed in their daily cooking, they need access to seaweed, recipes and more knowledge about preparation and taste, the scientists emphasise:

“Cookbooks, food blogs and recipes can help, but we also need to improve the knowledge and craftmanship about seaweed as a food ingredient. We can do this by including seaweed as a subject in natural science and home economics, and as a subject in the chefs’ and bakers’ education. By using all senses and experimenting with seaweed in the kitchen both at home and in school, people can learn to utilise the different seaweed ’taste characteristics',” Ole G. Mouritsen explains.

Mentioned in the article

Dr Ole G. Mouritsen is the head of centre in Taste for Life and head of the Gastrophysics focus area. He is a professor in Gastrophysics and Food Innovation at the Department of Food Science, University of Copenhagen.

He is an expert in bio- and gastrophysics with a special focus on mediation of the natural sciences to the general population through knowledge about food and taste.