”The packed lunch has to consist of different elements so that you can eat parts of it, when you're hungry. And there has to be something delicious to eat at the end.”

”We make rye bread chips because they're a healthy snack, which tastes good because it's crunchy. Then we cut it into triangles because it looks good. Now we just hope they'll become crunchy enough.”

That is what some of the eighth-grade pupils said while they brainstormed and tested their ideas for the ultimate packed lunch. This was all part of the lesson plan ”The packed lunch of the future” developed by Adam Williamson, home economics teacher and taste ambassador in Taste for Life. 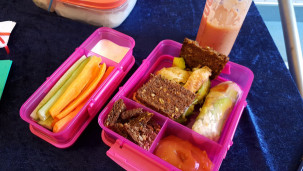 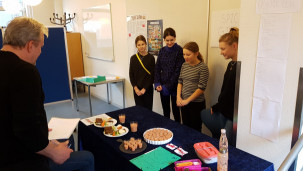 The winners present their lunchbox 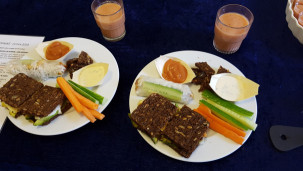 The winning lunchbox is crunchy and greasy

From idea to the winning packed lunch

The pupils spent two lessons to develop their ideas and test them in the kitchen. In the first lesson they were told to brainstorm using the categories wet, dry, green and crunchy. In the second lesson they tested their ideas and adjusted their recipes to make the taste – in their opinion – spot on.

On the third day, the final packed lunch was prepared and served to both professional chefs, Tom Skovgaard Stobberup and Carsten Folkmann, and to the other pupils at the school, who had to judge the taste.

”It tastes GOOD. I would like to have this in my lunchbox. EVERY DAY.”